Heroes from the shadows 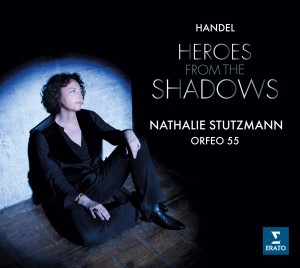 Heroes from the Shadows makes stars of the unfairly overlooked roles – from Arsamene to Zenobia – who sing Handel’s hidden operatic jewels: Cornelia from Giulio Cesare (“Son nata” in duet with star countertenor Philippe Jaroussky as her guest), Dardano’s stately “Pena tiranna” from Amadigi di Gaula, and the sublime, intimate “Senti, bell’idol mio” sung by Claudio in Silla. Stutzmann conducts her superb musicians playing on Baroque instruments, while singing some of Handel’s most virtuosic arias, all with a rare mastery of both arts – neither one in the shadow of the other.

“From early on in my career, I’ve had the fortune of being invited to play the star roles for contralto in these great Handel operas – be it Caesar, Orlando, Radamisto or others”, she explains. “But I dreamed of the tantalising possibilities of immersing myself in the shadows of these works; shedding light on this repertoire of second or even third-tier background roles, often forgotten by audiences as they leave the theatre, but who captivated them for a few minutes from the edges of the main action. They’re a little like the actors that pop up in films, whose names we know and whose voices we recognise but we struggle to recall their names.”